As a developer, your main tool is definitely the one that allows you to turn your ideas into code: a code editor. To edit HTML and CSS code, you only need a simple text editor and the rest depends on your skills and your creativity.

However, to make your life a little bit easier, you can use code editors with advanced editing features. These features can effectively support you during coding, debugging, and testing.

What is a code editor?

A code editor is nothing but a text editor that is specialized for writing software. It may be a stand-alone program or part of an integrated development environment (IDE). They make writing and reading the source code easier by differentiating the elements, so the programmers can view their code.

With the variety of coding languages & techniques, it’s impossible to narrow down just one specific code editor as the best overall. We have compiled a list of the best 11 code-editors available today.

We will explain what each offers, and let you pick the one that suits you best.

So read on, and you may just find a tool that makes a big and positive difference to the way you work, day-to-day!

List of best code editors for software developers and enthusiasts:

One of the best ways to move forward in web development is to unify and create links between design and implementation. Brackets is an editor developed by Adobe for CSS, JavaScript & HTML that aims to do just that. It is a powerful yet lightweight and modern text editor.

The best function that separates Brackets from the rest of the code editors is its remarkable “Extract” feature. This feature allows you to pick colors, measurements, fonts, gradients, etc. from a photoshop file into a ready-for-web CSS.

Whether it is for writing PHP, CSS, HTML, or other languages, we all want to have to use only one, a simple-to-use editor which looks great and has good features to boot. If this is what you are looking for, you may find it in Netbeans.

It is an open-source code editor tool for developing applications using many languages. If your applications were developed in the recent past, NetBeans allows you to upgrade all your applications to benefit from the new and improved Java 8 language constructs.

One of the most well-known code editors that developers all over the world have been using for quite a while is Notepad++. It’s far simpler, without too many bells and whistles. Once on your hard drive, the editor only takes up about 4MB. However, it packs a heavy punch in that little space! This code editor has an amazing execution speed, which is great for modern machines.

Notepad++ is jam–packed with standard features and supports more than 50 programmings, scripting, and markup languages, including syntax highlighting and code folding. Users can even define their own, a first among these code editors. It is an easy-to-learn tool for your most basic text editing needs if you’re willing to overlook its outdated look and feel.

Another software that is reportedly comprehensive and can be considered an IDE within itself is called: Vim. Vim is a favorite for many old-school programmers, as well as the keyboard enthusiasts. This code editor has a rich history; it originated from the Vi editor (1976), and it’s still being developed today.

The program is navigated entirely via the keyboard, making it much faster and more efficient – but only if you make the effort to learn how to operate it. If you have the time to learn it, Vim can really increase your coding productivity!

Much like Vim, Sublime text is known for its top-notch performance. It comes with all the features you would expect from a powerful code editor and a lot more too. It is lightweight, open, and ready to edit your file almost as soon as you’ve managed to click the button. This responsiveness is one of the things that makes it the best code editor in its class.

If you want to get the most out of Sublime Text, you need to install some extra plugins. Sublime Text is free to download and start using but for extended use, you’ll need to shell out $80 to get a license.

It is a cross-platform code editor created by developers for developers. Atom is a ‘hackable’ text editor, and what it means is that it allows new and intermediate programmers the chance to create their own text editor without years of programming experience. Sounds amazing, doesn’t it?

One of the most important things for all developers is collaboration while working to share ideas. Atom allows you to do this right from your editor. Very much like WordPress, Atom users can submit packages and themes for the software. Earlier, Atom had performance and stability problems, but those have diminished significantly as it has matured.

Read more: Software Design Document: What, Why, and How? (Template Included)

Belonging from the family of software developed by the tech giant Microsoft, Visual Studio Code is known to be one of the most fully-featured, well-rounded code editor. It is an extensible, open-source code editor that supports a wide selection of programming languages and frameworks, from the familiar C, C++, and C# to modern languages like Go, Rust, and Node.js.

Visual Studio Code has many awesome features that can greatly improve your development workflow. One of the most effective and time-saving features of this application is its infusion with A.I. This means that all of the code that the developer writes in the application is read by the software. As a result, it generates auto-responses for code writing, based on variable types, function definitions, and essential modules.

Espresso is a web editor for Mac that makes building, improving, and publishing websites a treat. It comes with a beautiful interface and a really powerful code editor. The software is beginner-friendly and provides lots of great features for advanced users as well.

With Espresso, you can finally stop spending so many hours trying to configure an unstable server. The latest version has a Clodette menu, that allows you to edit and sync servers automatically, as well as publish your content quickly.

Of all the code editors for Mac, BBEdit is definitely one of the oldest. This powerful and feature-rich text editor comes with a very intuitive user interface that makes it super easy to browse files and work on projects. It supports 44 programming languages including HTML, JavaScript, Perl, Python, VBScript, and SQL. It is designed and crafted for the purpose of editing, searching transformation, and manipulation of text.

TextMate is a high-end source code editor for Mac OS which looks super cool. It is a versatile text editor with a unique and innovative feature set. It includes ready-made libraries of macros and snippets of source code or text (snippets), suitable for reuse for many programming languages. Without any doubt, if you are looking for a free text editor for Mac, you should consider TextMate.

Bluefish is a powerful editor that is mainly for experienced web designers and programmers. It supports many programming and markup languages, but it focuses on editing dynamic and interactive websites.

If you are a fan of working on dozens of different software at once and not wasting time for the code editor to take its sweet time to run your code, then Bluefish is the code editor that was designed with you in mind. BlueFish is an ultra-fast code editor that supports a variety of markup languages. The tool is so efficient that it loads a complete website within a second!

There you have it! These are the 11 best code editors available right now. Programming and development is a hectic job, and our goal is to enhance the overall coding productivity by giving you this list.

Every year, new code editors are released, and developers find it challenging to choose one. You can choose to have one go-to editor that you use for everything, but many developers use different code editors to perform different tasks.

There are many other code editors out there. Whether they’re focused on a particular niche or mass-appeal, they’re all fighting for attention and usage. How long will these code editors maintain their lead? Will we see a newcomer rise through the rankings in years to come?

One thing we know about the code editor wars—developers are the ones to benefit the most out of it!

If you have a favorite software that wasn’t on this list, feel free to share your input by tweeting us @bit_docs.

13 Programming Blogs and Websites to Improve Your Coding Skills

Test Plan for Software: What, Why, and How to Write It?

Technical Documentation: What, Why, and How? 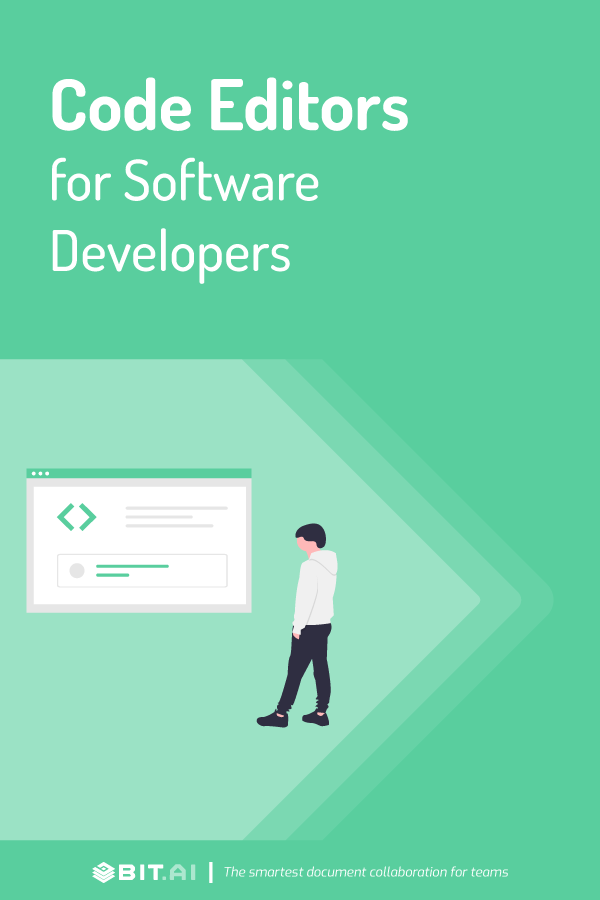 Cost Management Plan: What is it & How to Create it the Right Way?

Social Proof: 8 Ways to Use it to Get More Sales!

Unique Selling Proposition: What is it & How to Create Your Own?

Cloud Storage Solutions: What you need to know!

Thank You Letters: What are they & How to Write a Perfect One?

Performance Improvement Plan (PIP): What is it & How to Create it?

Buyer’s Journey: What is it & it’s 4 Key Stages You Must Know!

Communicate Effectively: How to do it in Workplace! (Types & Techniques)

How Bit.ai Can Improve Your Team Collaboration?